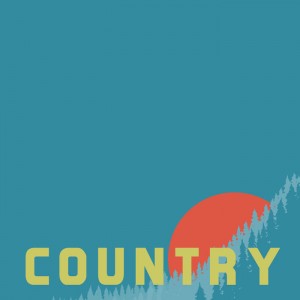 Bombadil‘s seventh album returns the lineup from 2017’s Fences, namely James Phillips, Stacy Harden, and the band’s one consistent member since forming in the mid-2000s, Daniel Michalak. Titled Beautiful Country, it was written mostly in 2018 during a time of transition for all members, including major life events like marriage, learning a new trade (audio and aeronautical engineering), and Michalak’s relocation from their base in North Carolina to southern France.
They carry over the John Vanderslice-produced Fences‘ efficient approach to their sweet, sentimental, and gently playful songs. This time, the album was produced by Vanderslice collaborator Scott Solter, who is also known for his work with acts including the Mountain Goats.

Acoustic folk instruments, keyboards, light drums, and strong vocal harmonies constitute most of the tracks here, including the opening love song, “Oh Suzanne.” In the spirit of Bombadil, it works in a reference to the similarly-titled Stephen Foster classic. With a more confrontational tone despite its bouncy melody and sections of cheer team-like rhythms, “Goodwill Socks” is one of many head-bobbing tunes by the group but unique in offering the harmonized warning: “Put me in the yard with all the fallen logs/Put me in the discard pile with Goodwill socks/I won’t wait any longer/And I won’t settle.” Sparer tracks include “On the Seashore,” a loose round featuring guest vocalist Kate Rhudy, and the piano-and-drums song “Faces,” which notices, “Everybody wants to change you/Makes you not too different/Everybody wants to shame you/Makes you cold and distant.” Thoughtful throughout and filled with effortless melodies, Beautiful Country closes on a vulnerable duet between Rhudy and Michalak, “The Real Thing,” which helps extend the band’s career-long sweetness through line.

Keep up with Food-Lovers

Behind the Scenes in Paris – Journees du Patrimoine